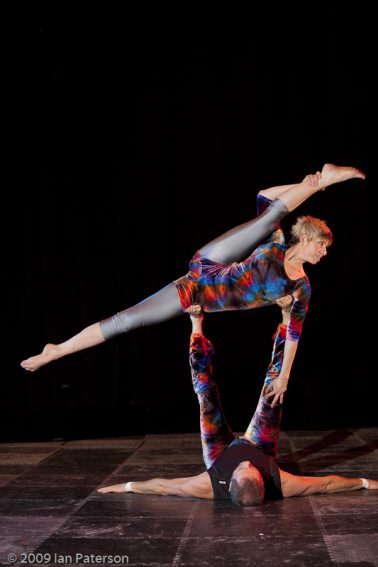 Michael Locke was born and raised in Vancouver, B.C. and has a 6 year old daughter named Sadie. His athleticism comes from years of training in martial arts.   When he was in his mid 20’s he was very involved in partner disco dancing and won several regional contests with his groovy style.

By day Michael is a boat broker and by evening he is a swinging trapeze coach at a local circus training facility.  Michael and Keely have been performing together for a couple of years as well as teaching workshops and weekly classes in partner acro. In 2010, Michael had the honour of participating in the Vancouver Olympics in the ground ensemble work.

Keely Sills was born and raised in Vancouver, B.C. and lives on a sailboat with her husband Nathan. Keely graduated from Main Danceʼs 3 Year Modern Dance Program in Vancouver in 2003. Keely has worked as a dancer, as a magicianʼs assistant, and as a stunt woman for film. Since 2005, Keely has been performing aerial dance including harness work, aerial silks, double trapeze, and aerial hoop. She is very involved in the circus community as an aerialist as well as a balancer working with Michael Locke.

She is a company member of Aeriosa Vertical Dance and is often seen around town dancing on the sides of high-rise buildings.  In 2010, Keely performed as an aerialist in the opening and closing of the Vancouver Olympics.  Her latest venture was in London auditioning as an aerialist for the 2012 Olympics